Celebrating 10 Years Of ShoreTel Sales And Support In Japan 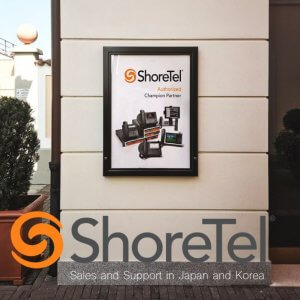 In 2006, AINEO had a lot of Nortel Meridian PBX systems in the market place. The problem was Nortel was a dead product and a company in decline. AINEO was searching for a voice product that we could bring to market but did not see any innovative systems in Japan.

We evaluated many platforms, visited ShoreTel as well as some other companies’ Sydney Australia offices, and eventually stopped by ShoreTel’s California offices to talk about Japan. Japan had no Japanese language display and no way to connect to the Japanese Public Telephone Network. After evaluating multiple platforms, AINEO decided to introduce ShoreTel to Japan.

Putting a system into another language is no easy task. Interconnecting with another country’s network is also a lot of work. AINEO worked with ShoreTel to localize the products for Japan, get materials in Japanese, and roll out the UC phone system in Japan. Sales started in 2007.

In 2017, AINEO celebrates 10 years of ShoreTel systems in Japan. The market is changing rapidly as even phone systems are going to the cloud. However, organizations can create their own private voice cloud using ShoreTel equipment. Interested in ShoreTel? Contact AINEO here, our bright, quick, and flexible team would be happy to help you put together the system that matches your business.