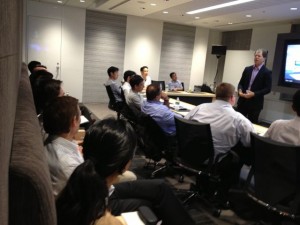 AINEO kicked off the first High Tech Management League (HTML) meeting in Tokyo at Citrix Systems new Executive Briefing Center that opened today. The HTML is the gathering of high technology professionals in a cross section of industries.

Citrix Systems Japan President & CEO welcomed the HTML and introduced members to how Citrix evolved as a company to include some 8,000 plus employees around the world. He explained how Citrix is working to provide a consistent executive briefing center experience across the globe. Tokyo’s briefing center adds to existing centers in Ft. Lauderdale, Santa Clara, Paris, and Bangalore.

Mr King introduced the Citrix Systems CDO, Chief Demo Officer, to the HTML who was visiting from the United States. Mr. Brad Peterson gave an excellent presentation on the current challenges in business and how the consumerization of IT is changing the way that everyone works. Mr. Peterson showed us many ways of how to make IT easier, more productive and cost effective.

Citrix hosted the event with excellent food and 30 plus people representing major companies from Sweden, the United States, Japan, China, and several other countries. The event was followed by a fabulous buffet with a lot of food and drinks to choose from. Many attendees were impressed with the venue, the discussion, as well as the quality of the guests and the speaker alike.

We look forward to our next HTML meeting in October.