How To Get 3 More Years Out of Your Computer

We’re living in an amazing time. It seems like the collusion between Dell, IBM, HP, Microsoft, and Intel that required higher spec machines for more bloated software has come to an end.

Most users noticed the average PC constantly had to be upgraded to handle the latest version of MS Office with it’s Excel, Word, Powerpoint and Outlook applications. We don’t know about you, but Microsoft certainly would have lost us during that time if we weren’t a high technology firm. Buying new computers for your team every three years is not exactly ideal. Many companies got to the point where they refused to buy the latest version of the MS Offices licenses do to this constant application upgrading process.

Finally, the processors, memory, and media is powerful enough to handle the necessary applications. The only exception is probably the constant requirements of high spec machines for video production.

The TRIBE Support team recently did some tests. A 2009 13 inch MacBook Pro was choking under the burden of the latest Apple version of OS X called Mavericks. We were able to generate video based on it’s old processor, 1 TB hard disk (originally was 250GB) and CPU using iMovie and even Final Cut. However firing up the machine took some 90 seconds from power button to login screen. Unbearable.That was just the start. Loading times for applications was even worse. That brings the question-

How can you get more life out of your computer?

The answer is plain and simple. Replace your spinning hard disks with the high capacity solid state disks (SSD) like you’re using in your smart phone.

Once you’ve run your computer with SSD you’ll never go back to disk-based computing if you can avoid it.

For our TRIBE Support tests on the 5 year old laptop, we replaced the hard disk with a 512GB SSD and were able to not only make the machine usable, but it came to life and became spunky again. Applications that would show the famous Apple ‘beach ball’ spinning (the old hour glass in windows) were now popping open.

Want to know how to get three more years out of that borderline personal computer? Here’s an action list idea-

1) Back up all your data
2) Delete any unnecessarily large files from your original machine.
3) Back up your latest hard disk (Time machine works really well on Apple computers)
4) Pump up your machines memory to 16GB or so
5) Replace your HD (that only spins at 5400 or 7200 rpms) to a small SSD that accommodates your everyday use docs
6) Place large files on a USB raid or external drive of some sort (even a 64GB memory stick works well)

Do this and watch your computer go from retirement back into professional performance.

After running this hardware experiment the conclusion was of TRIBE is, for personal computers, let’s go all SSD.

Once you’ve souped up your old machine, go enjoy that PC with a new lease on life. You’re probably running 8 times faster. 😉 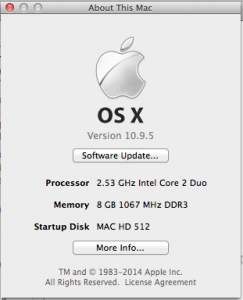