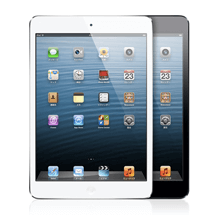 The Apple iPad has certainly changed the market in computing, adding a whole new computer market. We had desktop PCs, and then laptop and notebook PCs, but with the iPad we now have tablet computers, or perhaps we should just call them all devices.
Google came out with their copy of the iPhone. Using the same Android OS, suppliers such as Samsung have come out with more products and eventually the tablet computers based on Android such as the Samsung Galaxy.
But what really is the iPad killer? Is it some insufficiently designed and produced device from a bookseller such as the Kindle Fire? Is it a sexy device from Samsung?
At AINEO, we believe the device that will upend the iPad is the iPad Mini. Why?
– The iPad Mini is very easy to carry
– The Mini utilizes the app store that everyone is used to
– The device is light; you can always have it in your bag
– The design follows the same standards used on the iPad
For anyone who travels, the iPad Mini will become the device of choice. We believe that if Apple had introduced the Mini first, it would have sold even more than it has of the standard size iPad.
So there you have it—the ultimate iPad killer is the iPad’s smaller sibling.